Bitcoin has surprised the staunchest of supporters in the last week as the coin rallied above the $30,000 level to see highs above $34k. The coin then pulled back sharply on Monday to hit $28,000 and now trades under $32k. The week could be volatile and will determine whether the market advances further or sees an extended correction. The support levels in Bitcoin could see a move towards the $25,000 mark if selling persists.

The price of Bitcoin has been storming higher as institutional investors were struck with FOMO in light of the recent developments, such as the PayPal addition and other corporate interest. 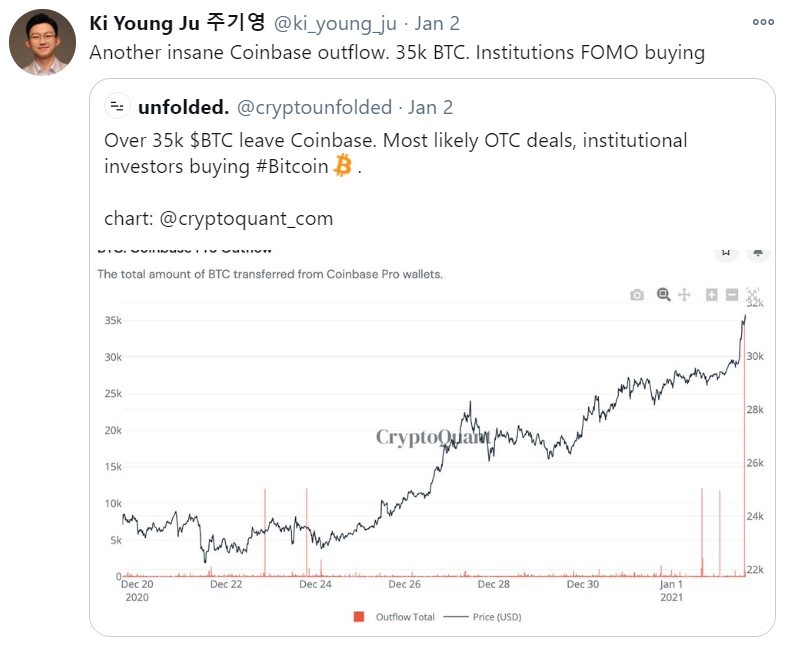 One signal of big interest was the news that over $1 billion of BTC had left the Coinbase Pro exchange. The CEO of crypto analytics firm CryptoQuant Tweeted the news and the graph highlights a growing trend of coins leaving the exchange. This is done to place the coins in some form of custody or cold storage and implies a longer-term holding.

The rise in Bitcoin demand from institutions has led to fears about Bitcoin’s supply. With only 18.5 million coins available, the more coins that are held by investors will mean fewer coins available in circulation. This will only increase the price of BTC as the key store of value in the crypto market.

Ethereum has seen a big rally on the week with a 34% gain and the coin saw a big spike above the $1,100 level today. The record high for ETH is around $1400 in late-2017 and the coin has a chance to get there again if demand continues. Investors will be looking outside of Bitcoin in light of the supply issue, but Ethereum is also a big player in the decentralized finance (DeFI) space.

Ethereum is moving to a 2.0 upgrade named Serenity which is set to improve the speed, efficiency, and scalability of the network. This will provide another boost to Ethereum in the finance world as it will be able to drastically increase transactions and reduce congestion on the network and high gas costs.

Ethereum is home to the majority of decentralized finance coins and many projects were starting to look outside of the ETH network due to the rising costs. Other networks could enter the space to support projects in a big way and this will lead to further tokenization of Bitcoin’s market cap.

The price of ETH will now seek to hold the $1,000 level and this will likely depend on Bitcoin’s ability to hold its own support levels. The rise has been fast and steep, so the potential for a swift correction is possible.

Polkadot was the best-performing coin on the week with a gain of around 60%. The coin now has a market cap of $8.3bn and holds the 6th position in the list of coins by market cap. DOT is the native token of the Polkadot project and is forkless, so it can be upgraded without hard forks to integrate new features or fix any bugs.

In a 2020 roundup, the Polkadot project shared an update on staking.

At time of writing, of the 1.02bn DOT which exist within Polkadot, 63% are locked into the staking system. Polkadot became the number one network for staking by value staked in its six short months of existence. A further 10.4m DOT sits in the Polkadot treasury ready to be spent on great proposals, and this is set to increase at around 1.6m DOT each year, funded from part of Polkadot’s 10% annual token-base minting rate.

An interesting part of the Polkadot project is its commitment to funding other projects in the community. The community now boasts over 100 teams and projects working on different use cases. The team stated that China alone has over 30 teams working on, “systems, projects, and components for the Polkadot ecosystem. In November 2020, China’s Blockchain-based Service Network added Polkadot to its own list of supported public blockchains. 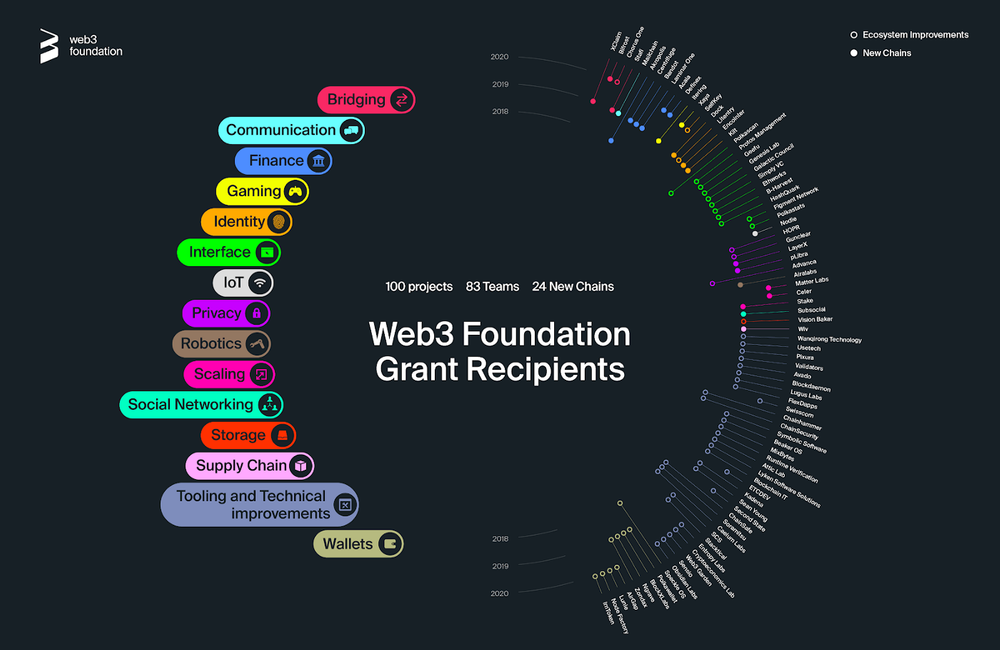 Polkadot is seen as a rival to Ethereum and a recent development is the launch of a DeFi insurance product on the network by Polkastarter. The growth in use cases via the community funding should continue to see Polkadot being a big player in the decentralized finance space.

The price of DOT is testing the $11.00 level this week after a rally from the recent pullback, where the coin traded at support around $4.50.

SushiSwap was a strong-performer on the week as the SUSHI coin gained 33%. The move marks a big revival for the coin which was hammered earlier in the year over controversy regarding the coin’s founder.

Chef Nomi liquidated his sushi holdings in September, which caused a crash in the coin’s price of more than 75% in the price of SUSHI. Many in the crypto space called his action an exit scam. The founder later transferred $14 million in ETH to the SushiSwap treasury and apologized to many parties for what he called an “emotional and greedy” decision. The underlying attractiveness of SushiSwap has remained and the coin has seen a rebound.

SushiSwap is a decentralized exchange on the Ethereum network, which forked away from Uniswap. The project is now looking to capture some of the market share that Uniswap has made for itself. The project is attempting to increase its dominance with increased liquidity incentives and new features, alongside a recent merger with Yearn Finance.

The merger allows Sushi to become a part of the Yearn.finance ecosystem and it also leads to synergies between the two projects because it gives Yearn.finance access to an automated market maker.

The price of SUSHI saw a spike lower in December to the $1.20 level but quickly rebounded and the coin has now tested the $4.00 level.

Bitcoin mining revenue jumps up 50% to $23M in one month

Bitcoin mining revenue jumps up 50% to $23M in one month