The best (and worst) quotes, adoption and regulation highlights, leading coins, predictions and much more — one week on Cointelegraph in one link!

Coming every Saturday, Hodlers Digest will help you track every single important news story that happened this week. The best (and worst) quotes, adoption and regulation highlights, leading coins, predictions and much more a week on Cointelegraph in one link. 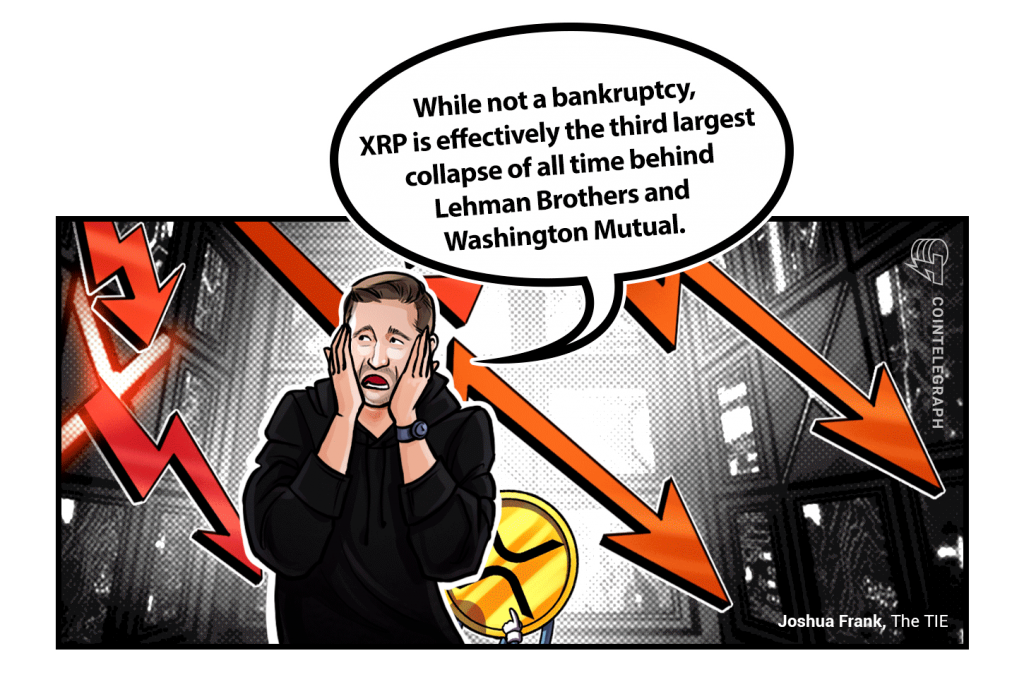 As 2021 began, Bitcoin was teetering on the edge of $30,000 continually hitting new all-time highs in the process.

There was drama at the start of the week after BTC crashed by 6.5% in a matter of minutes, with a sell wall at $28,400 wiping thousands of dollars off its value.

Bitcoin still had plenty of fight left. As New Year neared, a high-volume surge helped the worlds biggest cryptocurrency waltz past $28,500 and surpass $29,000.

And on Jan. 2, BTC rapidly soared above $31,000 liquidating a huge number of risky positions in the process and inflicting huge pain on traders betting on a bearish pullback.

In another milestone, Bitcoin hit an all-time high against gold hitting 15.40 gold ounces and surpassing the previous peak from December 2017.

BTCs newfound market cap above $580 billion wasnt lost on crypto enthusiasts, either, who were quick to point out that its valuation now exceeds that of Warren Buffetts finance giant Berkshire Hathaway. Buffett famously described Bitcoin as rat poison squared.

Grayscale rounded off 2020 with yet another extravagant Bitcoin purchase. In December, the company snapped up 72,950 BTC far more than the 28,112 BTC generated by miners.

Overall, Grayscales total assets under management across its various crypto funds now stand at $20 billion a stark contrast to the $2 billion it controlled one year ago.

All of this powerfully illustrates an ongoing liquidity squeeze in Bitcoin, where large buyers suck up any available supply and remove it from circulation.

Data from Glassnode shows that Bitcoin is becoming much more difficult to buy and the amount of BTC received and spent among entities is decreasing.

U.S. exchanges are suspending or delisting XRP left and right

Things are going from bad to worse for Ripple. Several major crypto exchanges including Binance US, eToro, Coinbase and Bittrex have halted XRP trading for their American customers.

All of this comes after the U.S. Securities and Exchange Commission accused the blockchain firm of selling XRP tokens in violation of securities law. Both sides will come face to face in a telephone pretrial conference on Feb. 22, 2021.

Earlier this week, Ripple accused the SEC of attempting to bring down the entire cryptocurrency industry in the U.S. and said the company had been seeking regulatory clarity on digital assets for years to no avail.

In a defiant statement, it wrote: The public and press have only heard the story from the SECs side, and well be filing our response in a few weeks to address these unproven allegations against Ripple.

All of this drama has caused XRP to lose more than 60% of its value over the past two weeks.

XRP the third largest collapse of all time, says The TIEs Josh Frank

Its been a spectacular fall from grace for XRP since its market cap hit an all-time high of $137 billion in 2018. According to The TIE, the current turmoil has helped the altcoins valuation fall by 93% since then dipping under $10 billion.

The TIEs CEO, Joshua Frank, said this spectacular descent effectively makes it the third-largest collapse of all time bigger than Enron and WorldCom, and not far behind the likes of Lehman Brothers and Washington Mutual.

Frank told Cointelegraph that it was sad and unfortunate for individual investors who have lost unimaginable amounts of money, adding:

The founders of Ripple continued to dump their tokens for years and made hundreds of millions of dollars.

A report from the New York Times has alleged that Coinbase paid salaried Black employees approximately 7% less than people in similar positions.

The claims are based on payroll data from 2017, and across the company, this averaged out to a difference of $11,500. When factoring in stock options, the gap in compensation was closer to 11%.

Its also alleged that there was pay disparity by gender, with data suggesting that, on average, women at the exchange were paid 8% less than their male counterparts that year. In monetary terms, thats $13,000.

NYT reporter Nathaniel Popper wrote: The pay disparities at Coinbase appear to be much larger than those in the tech industry as a whole, and at the few other tech companies that have had to release data.

Coinbase chief people officer L. J. Brock was quick to respond to the allegations. He said that significant work has been undertaken to create a transparent and fair pay policy. 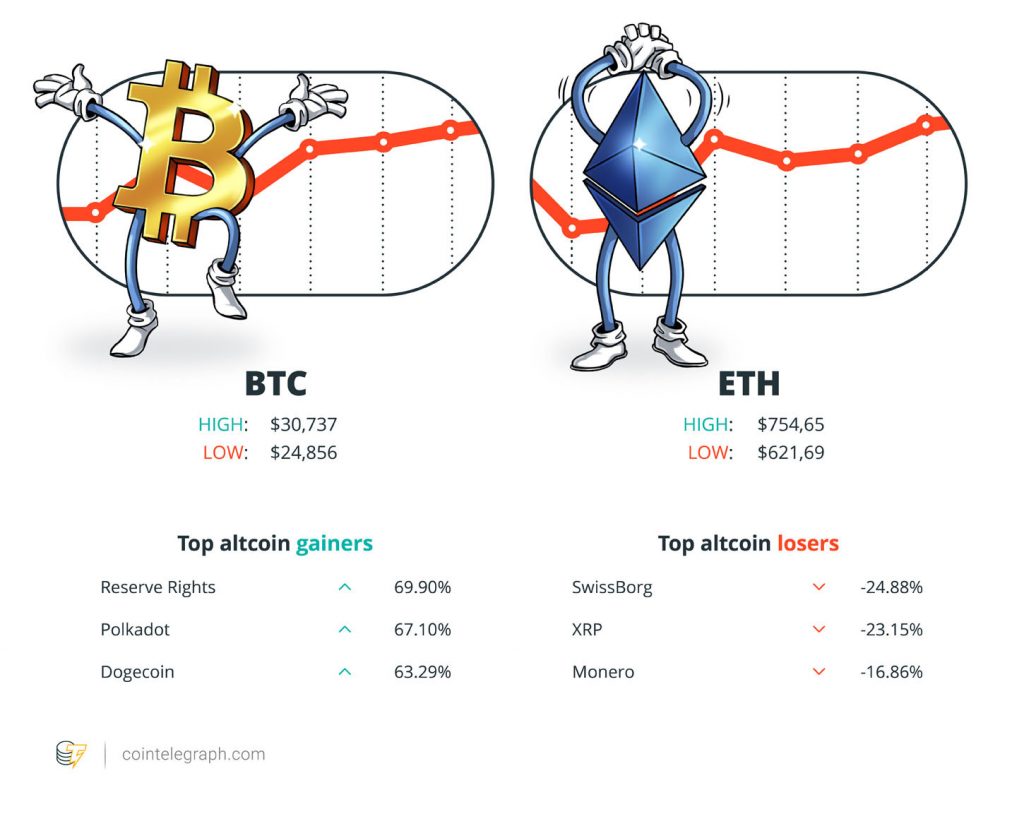 For more info on crypto prices, make sure to read Cointelegraphs market analysis.

Prediction of the Week

Bitcoins monthly relative strength indicates that the worlds biggest cryptocurrency is primed for another rally.

Crypto Capo, a pseudonymous trader, said Bitcoins monthly RSI was close to 80 as December drew to a close. Historically, a strong rally has followed.

They wrote: When this happens, bullish trend continues, with an avg. return of 1010.87%. Each cycle is shorter.

Cointelegraph Markets analyst Michal van de Poppe is among those who have revised their Bitcoin forecasts for 2021. Proclaiming that a bullish year lies ahead, he revealed that he now expects BTC to be between $65,000 and $85,000 by December.

The options market is pricing in a 22% chance of Bitcoin achieving $120,000 by next year, but some cautious traders say the ideal scenario is to wait for BTC to consolidate at $25,000 or enter after the next price upsurge.

FUD of the Week

Nine congresspeople have written to Treasury Secretary Steven Mnuchin, telling him to hold his horses on proposals that would force registered crypto businesses to hold on to more customer information.

The mooted measures have been met with widespread outrage from the crypto community. Not only is Mnuchin pushing this rule out weeks before Joe Biden enters the White House, but just 15 days have been set aside for public comment far short of the typical 60-day consultation period.

In a letter, the lawmakers wrote: A comment period consisting of eight business days over two holidays is not appropriate for regulating any industry, and could result in stakeholders being unable to meaningfully respond.

Cover Protocol has published a compensation plan for token holders and liquidity providers affected by a recent hack.

Eligible liquidity providers on Uniswap, SushiSwap and Balancer will receive new Cover tokens based on their share of the liquidity pool on those platforms.

The compensation plan also revealed that token holders will receive new Cover coins on a one-to-one ratio with their initial wallet balance before the hack.

All this comes after Cover Protocol suffered an infinite minting attack that triggered a price crash. Several entities exploited the vulnerability, with the first attacker reportedly draining over $4 million from the protocol.

A 60-year-old man has been arrested at an airport in Delhi, accused of heading up a 25-million rupee ($340,000) cryptocurrency scam.

Police allege that Umesh Verma, along with his son Bharat, convinced hundreds to invest in a scheme going by the name of Pluto Exchange, promising monthly returns of 20%30%.

The scheme issued a cryptocurrency called Coin Zarus in exchange for investments. However, shortly after the scheme launched in November 2017, returns dried up, and Verma reportedly dropped off the radar, eventually resurfacing in Dubai in 2018.

Crypto transactions must be easier. Thats it. Thats the headline

The gulf between users and those who are designing cryptocurrency service platforms must be bridged before the masses will make the leap, argues Luke Stokes.

The U.S. has lost the 2020 crypto regulation race to Europe

When it comes to crypto regulation, the United States is falling further behind more progressive and visionary nations. Heres Johannes Kaske.

Though Ripple CEO Brad Garlinghouse is prepared to challenge the SEC over its lawsuit, Shiraz Jagati warns that the knock may be hard to come back from.